You are here: Home / Blog / Follow the Journey of MSC Bellissima from Ship Yard to First Cruise!

It’s not everyday we’re invited to experience the journey of a cruise ship from construction through to first cruise. As I’m sure you can imagine there were lots of excited messages flying around between our team when MSC got in touch offering us the unique opportunity to be ambassadors for MSC Bellissima.  The excitement levels were particularly high as two other major ship building milestones for MSC, the steel cutting of the brand new ship and the traditional coin ceremony for the Grandiosa were taking place on the same day.

Lisa was the lucky one available and flew out to France for a few days last week to visit the STX ship yard in Saint Nazaire. This is how she got on…

Follow the journey of MSC Bellissima from ship yard to first cruise!

Three years working at sea and yet this was my first time in a ship yard. I was travelling with the Managing Director of MSC, Antonio Paradiso, his PR and marketing team and a small group of cruise writers, all passionate about the industry and all eager to get a first glimpse of the mega ship we would be following the progress of for the next nine months.

Over dinner on our first night we excitedly spoke about what we expected to see the next day, how it would feel to see the Bellissima unfurnished and sitting in a dry dock and how exciting it would be to get up close to her huge propellers before they were submersed under water for the first time in preparation for floating out of the dry dock for her sea trials.

I’ve spoken before about the incredible feeling when embarking a cruise ship. I honestly don’t think there is a feeling quite like a cruise ship towering over you as you walk up the gangway, particularly one as big as the Bellissima which when finished will accommodate over 5,700 passengers and 1,700 crew.

Being one of the very first to step onto the MSC Bellissima, who up until this moment had only been seen by the construction crew, was a truly special moment and one I will remember forever.

We were met on the quayside and guided around the ship by a few of the French construction team.  They proudly pointed out the main guest areas and shared with us the vision of what she will look like when fully kitted out and ready to join the MSC fleet as the largest of 16 ships at the end of February. 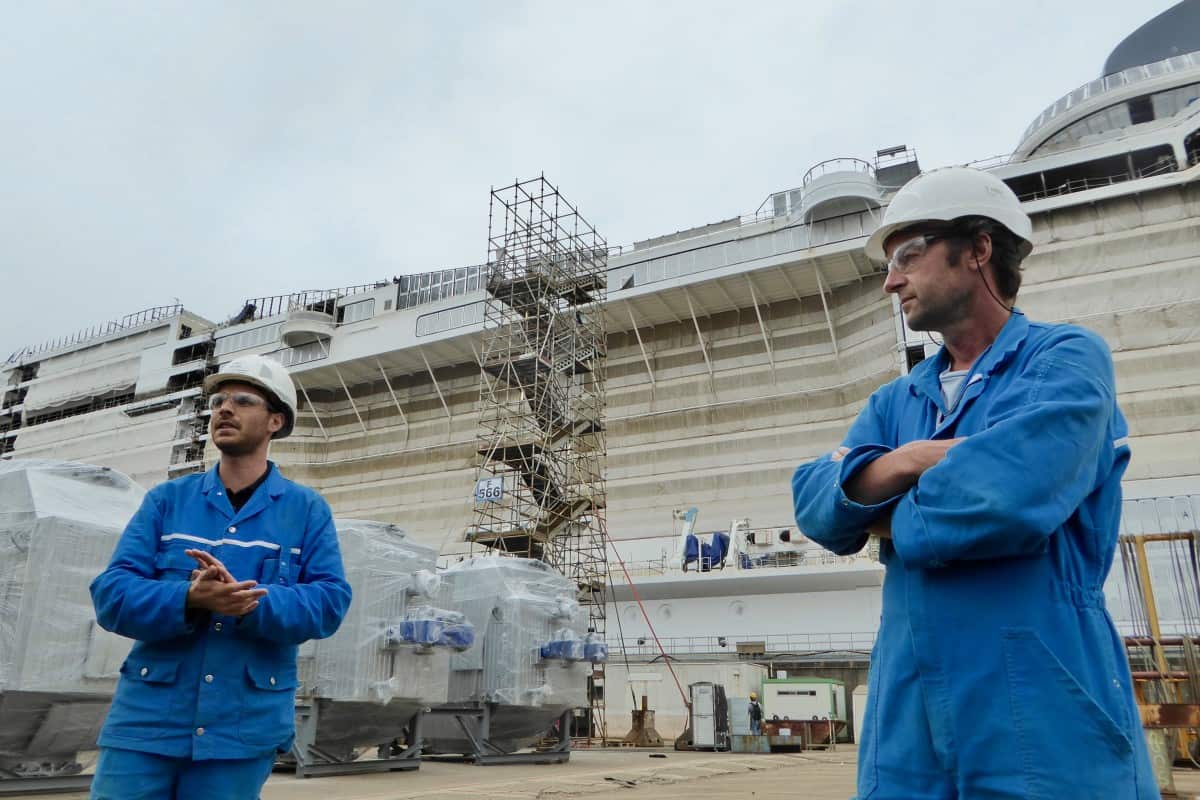 I had known the Bellissima was still in her fairly early stages, approx 45-50% complete, so I wasn’t expecting to see the Swarovski crystal staircases that I fell in love with during my day onboard the MSC Preziosa…

I had however expected her to have cabins and certainly hadn’t expected to be able to see all of her electrical wiring and plumbing.  It was such an eye-opening experience. I have a new-found respect for the ship building industry and honestly cannot begin to imagine how they project manage a ship build of this size.

*If you look on the photo above featuring the outside of the Bellissima you’ll see that she doesn’t currently have cabins. I found it fascinating to discover that they’ll be manufactured as a self-contained module, transported up the side of the ship via a special lift and slotted into place over the next few weeks… isn’t this incredible?

I spent the entire time onboard the Bellissima open-mouthed, giddy like a big kid (as you’ll see in my video coming soon!) and taking hundreds of photos. Of course there were no lifts yet installed and so I was grateful to be wearing flat shoes (and a hard hat!) to explore her 18 decks.

My favourite spot onboard was overlooking the pool deck and picturing what she’ll be like when finished, with passengers laying out on sun loungers soaking up the sun and enjoying a cocktail… 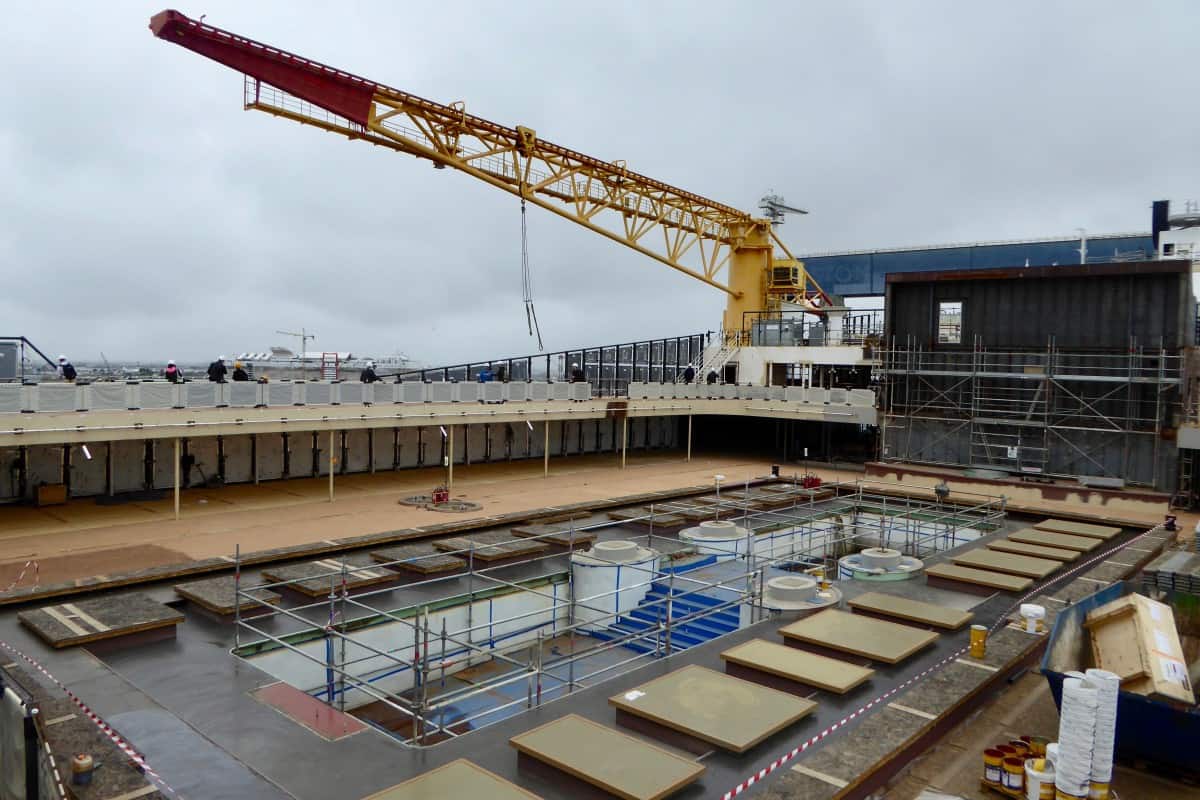 It wasn’t until I spoke to Antonio, the MD, who pointed out that she would be fully ready in just 260 days that it really sunk in how much work was involved in such a short space of time.  It’s incredible to think that in just 8.5 months the construction crew will add 20 bars, 10 restaurants, theatres, the cruise industry’s first ever in-cabin digital personal assistant to all 2,440 of her cabins, transform the two-deck inside promenade into a sophisticated 80-metre-long LED dome plus MUCH, MUCH more. No small feat as I’m sure you’ll agree!

After exploring inside the Bellissima, our group disembarked and went underneath her hull.  It was quite an emotional experience to walk under a vessel of this size and touch her propellers… a photo opportunity that very few of her passengers will ever get. 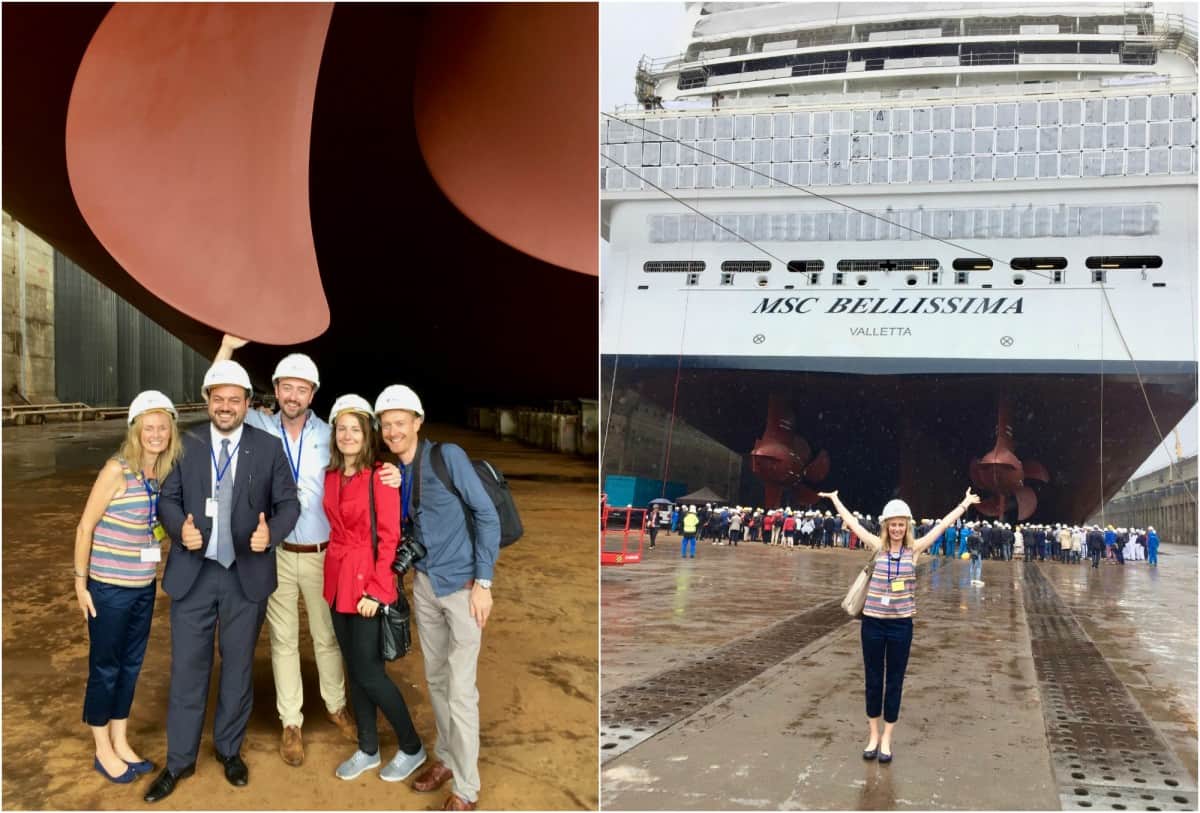 The last event of the day was witnessing the Bellissima touch water for the first time.  I had imagined the dry dock wall dropping away and the water gushing to greet her, (much to the amusement of everyone I admitted this to!)  Of course this isn’t what happened at all, the wall stayed in place and a steady flow of water surrounded her hull whilst we watched sipping on champagne and eating canapés.  It was the perfect end to a memorable day.

It was really strange to think that the next time we’ll see the Bellissima she’ll be berthed in Southampton getting ready for her three-day Christening celebrations and having passengers sleep onboard her for the first time. 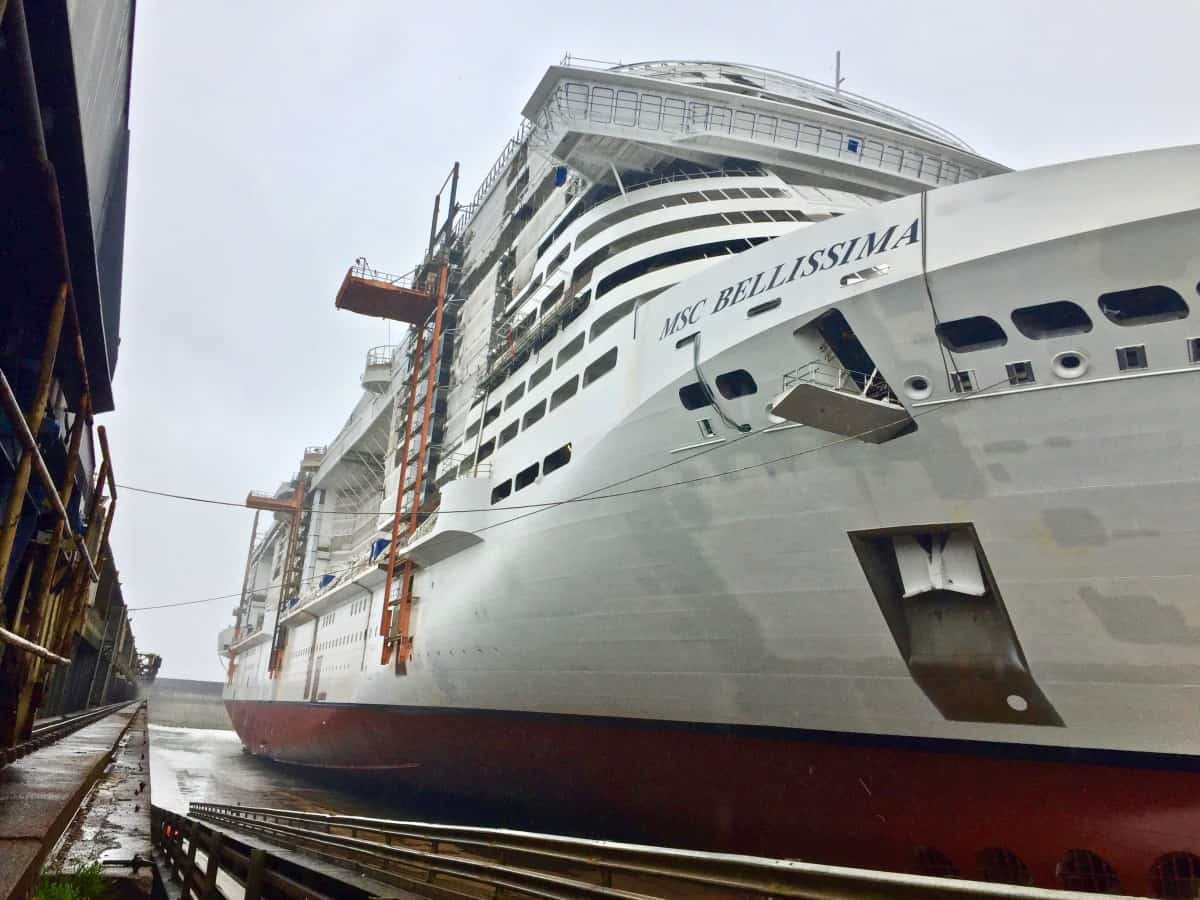 We’ll also continue to monitor Bellissima’s progress in the ship yard and share news with you here on Cruising with Kids. So watch this space!

Disclaimer – The Cruising with Kids team have been invited to be ambassadors for the MSC Bellissima.  We’ll be sharing news about the ship over the next few months and attending her christening ceremony in March.  All words and opinions are, as always, our own.

How are you all doing in this crazy world? We just

Over at Cruising with Kids we know what a tough ti

Thinking of everyone in Italy right now! It’s on

A little throw back to the summer and the #crownpr

What do you do to avoid seasickness ? It’s not

Let’s take a look at the Wild Forest Splash park