Hi there cruise fans and welcome to day six of our updates of an 80’s cruise onboard Royal Caribbean’s Navigator of the Seas with Cruiseco.

Two of our editors, Lisa from Travel Loving Family and Claire from Tin Box Traveller, have been invited onboard to experience this festival at sea with their kids. Claire is bringing you today’s postcard from the first of two sea day travels from Portugal back to Southampton:

Knowing that we’d boarded Navigator of the Seas for the last time and were now making our way back to Southampton was a real mood killer. However, with three kids aged five and under we didn’t have time to mope.

We were up in time to catch breakfast in the Sapphire Dining Room buffet while Lisa tried out the al a carte breakfast menu two floors above. We are still talking to each other, I promise. But even after six days we are getting a bit lost when we plan to meet, especially when the formal restaurant covers three floors! 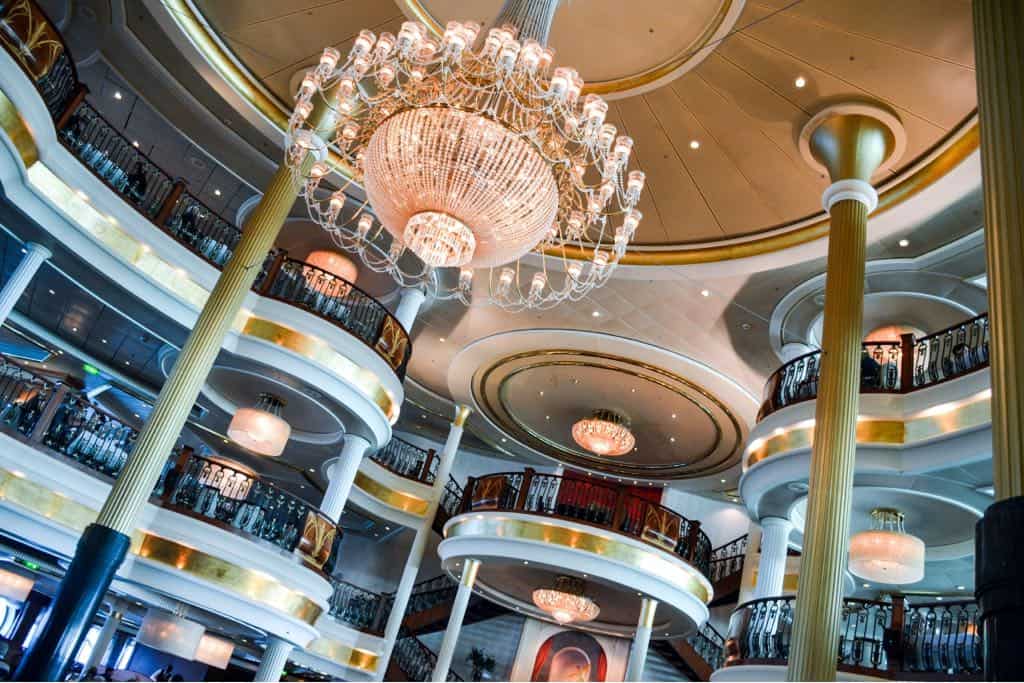 The stars of the Back to the 80s festival – the largest one ever to be staged at sea – were meeting passengers and signing autographs during the morning.

We decided to join the queue and see some of the acts up close. On reflection we should have dropped the kids off at Adventure Ocean as there were a lot of people waiting in a very orderly line to request scrawls on ship programmes, t-shirts and CDs. However the wait was worth it as we met the likes of Martyn from ABC and Tony Hadley of Spandau Ballet. We also met the Best of the Bee Gees tribute act and Rebecca O’Connor who performs as Tina Turner. Tony in particular was seriously charming and great with the kids. 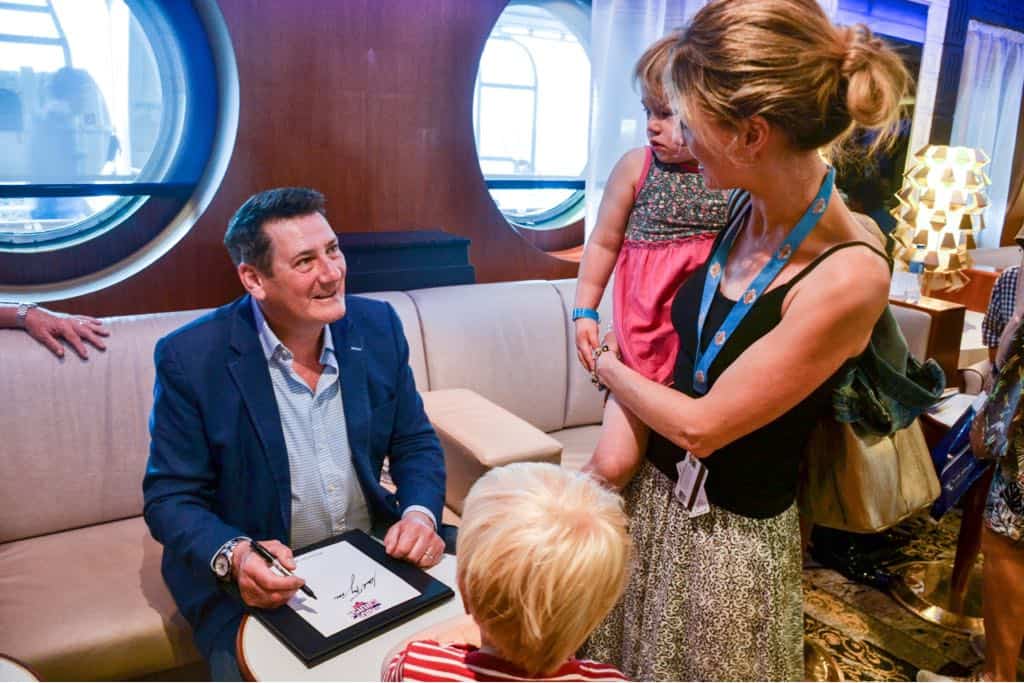 In the afternoon Lisa and I decided it was time we put our surfing skills to the test on Flowrider. We dropped Lisa’s son and my youngest daughter off at kids club and headed to the Sports Deck. My eldest was keen to see what the ‘big girls’ were getting up to so came with us.

Sadly Flowrider was out of action because the sea was a tad too choppy during our sail north. Instead we donned harnesses and tackled the rock climbing wall. I got half way up before proving just how out of shape I am and belaying back to the deck as proven in this video I shared on Facebook –

Meanwhile Lisa reached the top twice – she’s quite the monkey! 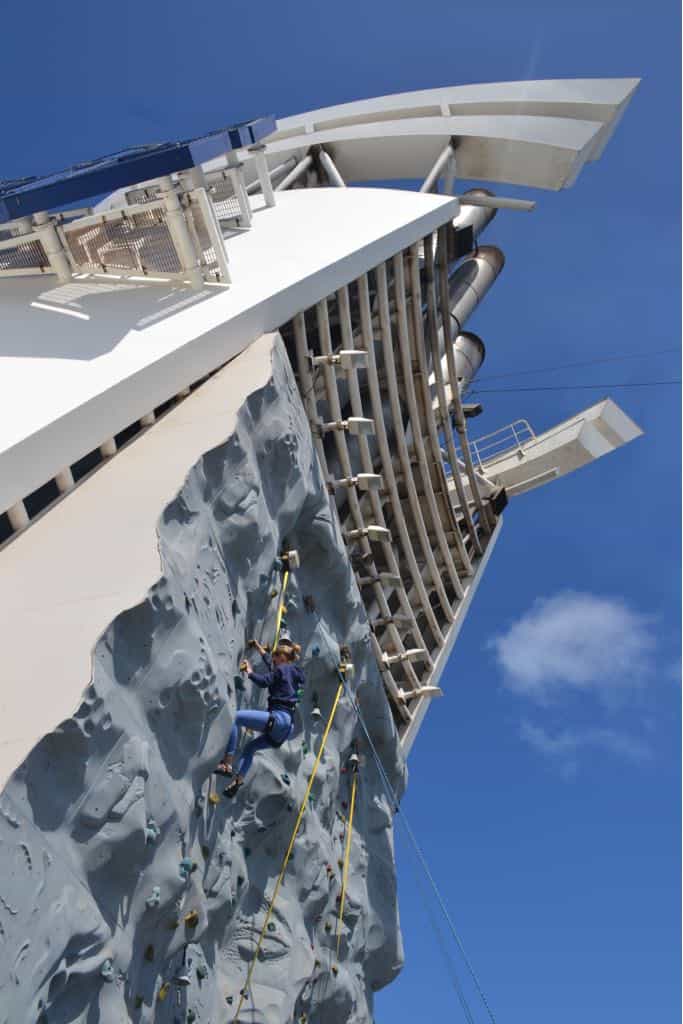 Our evening started with formal dining during which we got the chance to speak to another family about the entertainment.

We agreed we were all looking forward to seeing Tony Hadley. We just about had time to drop all the kids into Adventure Ocean for a pirate themed party night, grab a glass of bubbles as the sun went down and make out way to the Metropolis Theatre for the show. 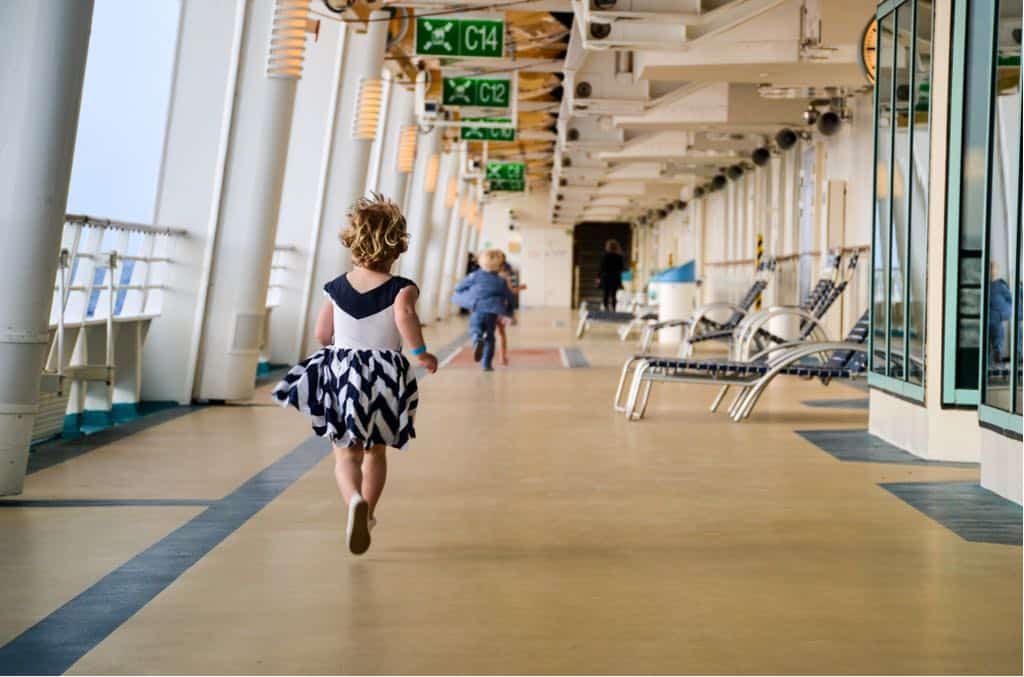 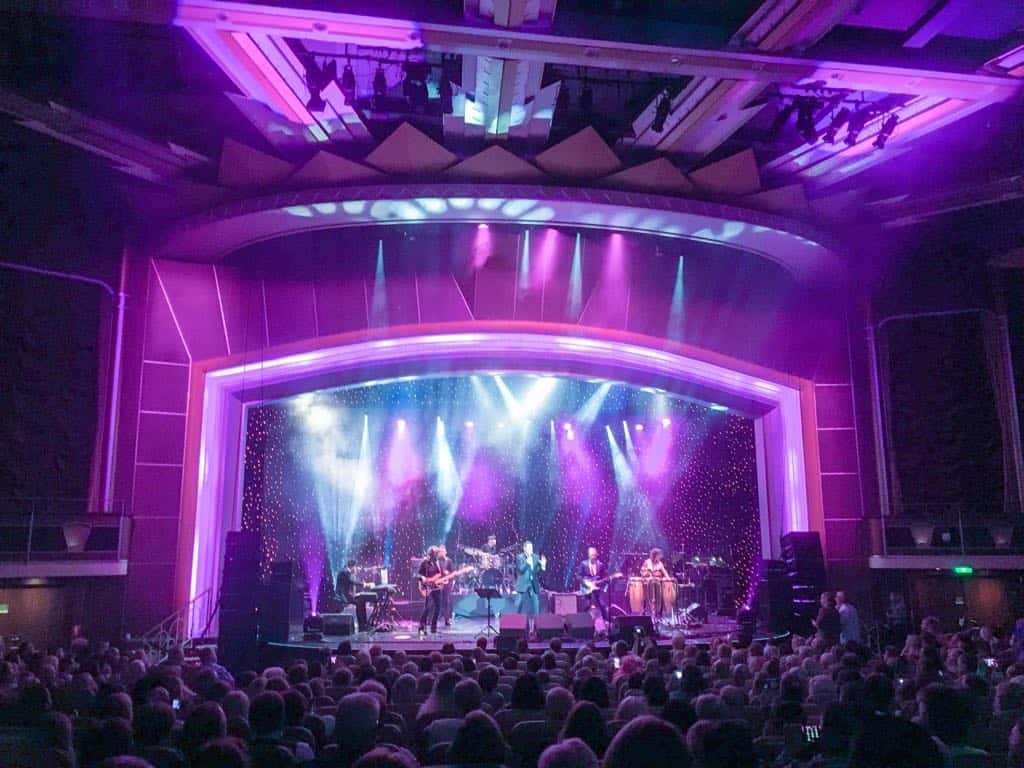 One word: amazing! Tony and his band captivated the crowd from the moment the lights went down. During the day a couple had got married on the ship and Tony dedicated his Spandau hit ’True’ to them. More than a few people, including Lisa, welled up as they took their first dance in front of the stage. Here’s a short video Lisa posted on her Facebook page…

It was a brilliant evening to round off a fun day at sea.  Just one more to go now and we’re sure it’s going to be a great finale to our Royal Caribbean cruise. Come back tomorrow to find out. In the meantime here’s what we got up to in Lisbon on day five.

Cruiseco have no more plans at this time to repeat the Back to the 80’s cruise from the UK however if you are a musical theatre, classical music and/or opera fan take note!  There are still a few cabins left on the Bravo – Cruise of Performing Arts, departing this Saturday, 19th May to 26th May from Southampton onboard Celebrity Silhouette.  Onboard will be 28 performers including Alfie Boe, Katherine Jenkins and the National Symphony Orchestra.  For more information check out – bravocruise.co.uk/2018/  (Other music cruises by Cruiseco which depart from Australia can be found here – cruising.co.uk/).

Even if you can’t get onboard yourself for Bravo fear not!  Our fellow co editor, Sarah from Extraordinary Chaos is going to be onboard with her family reviewing the cruise and sharing highlights with us here on Cruising with Kids so pop back next week to see how she gets on.

So jealous that you got to watch Tony Hadley!!!! What a legend

That climbing wall looks very high! Good for you both for giving it a go Lisa and Claire:)