And today we have a guest post from the lovely Jemma from Travelling Twinkles who is going to share her thoughts on her cruise on Symphony Of The Seas for families.

We’ve always been a fan of cruising. We went on quite a few pre-kids and took our eldest on his first cruise when he was 18 months old.

Although we were nervous that it wouldn’t work, particularly as we were cruising with Celebrity who are probably more geared towards adults. However, we needn’t have worried as we had a great time and they were very accommodating towards our son.

Since then we’ve consequently taken all three of our kids on Disney, Royal Caribbean and Carnival cruises and always had a brilliant time.

So, when we heard that Royal Caribbean were launching a new ship, Symphony Of The Seas.

And that it was going to be the biggest cruise ship in the world. We knew we had to try it. The Symphony of the Seas was launched in April 2018 and cruised in the Mediterranean during the summer season.

Mediterranean cruises are perfect for families as you get all the perks of cruising without having to endure the long flight (or the expense). With this in mind it was the perfect time to try it.

We cruised on the Symphony during May half term and we had a fantastic time. It’s ideal for families and there is literally something for everyone.

Symphony Of The Seas for families, Here’s some of the reasons why it’s the perfect cruise ship for families.

The cabins on Symphony Of The Seas.

As the ship is so new, the cabin décor is really modern. We stopped in an interior cabin and were really impressed to discover that our twins would be sleeping on a sofa bed, rather than the bunk bed style beds that you often find on cruises.

As they’re only five, I felt much more comfortable with this than having them sleep above the main bed.

The only negative, is the lack of storage space. It was just about ok for a week, but if we’d been on for any longer it would’ve been a struggle.

Although our cabin was one of the cheaper ones, so I’m sure if you opted for a larger cabin this probably isn’t the case.

Symphony of the Seas is home to the first Royal Caribbean family suite, which looks AMAZING! However I daren’t even look how much it costs! But it’s definitely on my wish list!

For more info on Royal Caribbean suites check out this post.

The food on Symphony Of The Seas

Cruises are famous for their amazing food, and this one did not disappoint. There were loads of places to eat and the quality and selection of the food was amazing.

There were a selection of places to eat on the ship that were included in your cruise price. These included the main dining room, the Windjammer buffet, the Solarium Bistro, Sorrento’s Pizza, Park Cafe, Cafe Promenade and El Loco Fresh.

As well as other speciality restaurants, with an additional supplement, these included Jamie’s Italian, a sushi restaurant, a steakhouse and a seafood restaurant, amongst others.

One restaurant I really wanted to try, but didn’t get round to was Wonderland, which sounded more like an experience than a restaurant.

When you are seated you “brush” your menu. This in turn reveals your element – either sun, ice, fire, water, earth or dreams. You are then served dishes based on your element.

It looked and sounded amazing and I definitely want to try it if we ever sail on Symphony again.

Symphony Of The Seas for families, The kids activities

Symphony of Seas is perfect for kids and teens and there was so many facilities and activities that we only just scratched the surface.

This was also the first cruise we’ve been on where all our kids went to kids club. However sometimes we struggled to get them out as they had such a good time.

The staff were brilliant and the facilities amazing. They even had dedicated arts and crafts rooms and a science lab! Additionally all the kids clubs are free until a certain time in the evening. 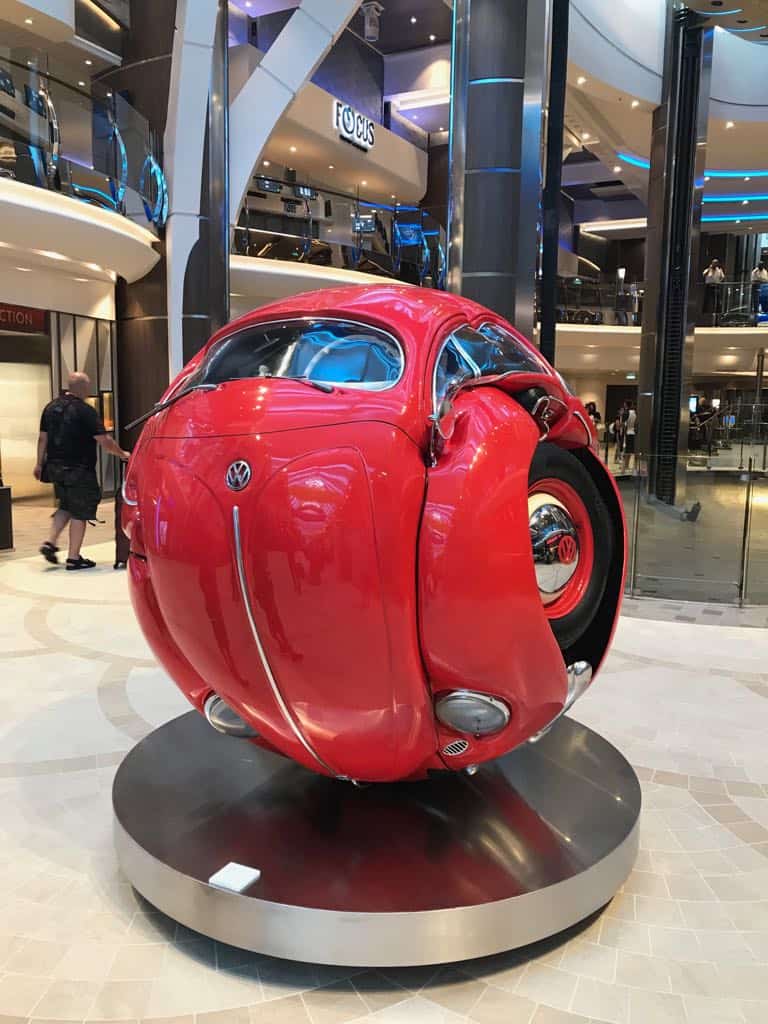 The entertainment on Symphony Of The Seas for families.

There were so many activities to choose from, running both day and night. Some activities were included, such as the evening shows in the theatre, the aqua show Hiro (which was brill), laser tag, ice skating, various talks and demos around the ship and activities around the pool.

Additionally there were also other activities such as sushi making and cupcake decorated that incurred an additional cost.

When we cruise we don’t tend to get too involved in the activities. We might watch the odd show in the evening, but with so many areas to explore, we never really feel the need to do much more.

The different areas/districts on Symphony Of The Seas

We loved that Symphony of the Seas has so many different areas. But particularly like the Central Park area, which is set on deck 8 in the middle of the ship.

It’s open air and it’s so nice to actually be able to eat and drink outside as this is often overlooked on other cruise ships. One evening, we splurged on a bottle of champagne from the wine bar in the Central Park area and sat outside enjoying it.

It was really lovely. Plus on this cruise there was hardly any wind (it can often be windy when you’re at sea), so it was great to be able to sit outside and enjoy the warmth.

We also really liked the Royal Promenade, which I mentioned earlier. In the evening there would often be parties or musical acts and there was always a nice lively atmosphere there.

The Bionic Bar was also located in this part of the ship and is basically a robotic cocktail bar. It was pretty cool ordering our cocktail on an iPad and seeing in being made by robots.

Royal Caribbean have some fantastic itineraries. On our cruise we visited Palma, Marsielle, Pisa, Rome and Naples.

Now that Symphony is based in the Caribbean, there will no doubt be a great selection of itineraries to choose from and places to explore.

We had an absolutely amazing time onboard Symphony of the Seas and could’ve easily stayed onboard for another week.

I’m normally ready to get off after a week on a cruise, but not this time. The ship is so big and there are so many great bars, restaurants and activities and areas that there just wasn’t enough time to fit everything in. We’d love to cruise on the Symphony again.

And for more about Jemma check out her fab blog here.